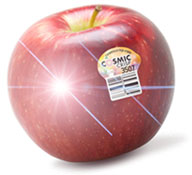 My friend Cone and I were hanging out when suddenly he got real serious. "What if you could have an apple that handled like a Red Delicious yet tasted even better than a Honeycrisp?" he whispered, his face as white as a ghost.

Boy, we sure had a good laugh about that one! Cone's real good at pullin' a phoney. But then, after wiping the tears from his eyes, Cone suddenly got even more serious, quickly pulling out a knife and holding it to my throat. "I'm fuckin' serious, he said."

Cone is bipolar. It can be a struggle for us both.

Anyway, a few days later I figured out what he was talking about when I saw H. Thommy, another friend of ours, outside Lane Bryant. "Hey Effalee, you had one of these Cosmic Crisps yet?" (He pronounced it "coz-a-mick.") "Substantial, with a consistent crispness and a balanced sweetness … why, it's like having an apple that handles like a Red Delicious yet tastes even better than a Honeycrisp!" Then he sucker-punched me in the medulla, because that's how we are.

"Remember that, motherfucker!" said H. Thommy. He didn't even mention anything about the Cosmic Crisp being exclusive to a consortium of apple growers, unavailable to the "little guy." (H. Thommy is sensitive to this kind of thing because he's 2' 11".) But fuck it, I figure this can only force the migrant-level apple motherfuckers to finally get their shit together and produce something we can all get behind, apple-wise.